I spent the majority of this past week at the librarian-iest place in Texas: the 2014 Texas Library Association Annual Conference. This year, the book jockeys of the Lone Star state descended upon San Antonio to share ideas, inspire, commiserate, shop, and get down. For your edumusement, here are my personal highlights and observations of the conference that was:

-During a session focused on optimal social media usage, one of the older attendees expressed trepidation about getting involved with social media at all. This elicited audible scoffing from the younger tablet and smart phone-wielding crowd seated behind me.

-At the same social media session, the speaker and a couple of attendees spoke of their initial reluctance to use Twitter due to their reflexive assessment of it as “dumb.” They have since tried it and now find value in it. I have yet to take the plunge with Twitter, not because I don’t see the value in it, but rather because I don’t think my life and thoughts are interesting enough to justify sharing (please ignore the hypocrisy and irony of that last statement as you read my blog, which is an ongoing effort on my part to come off as interesting to other people).

-There’s an app for everything now, and TLA is no exception. With the incredibly helpful TLA 2014 app, I was able to find information on every session, keep track of my schedule, view a map of the exhibit hall vendors, access session handouts, creepily check who was attending the conference, send messages to fellow attendees, and find nearby restaurants and stores. It beat the heck out of the paper pocket guide (I’m praising technology again; somebody stop me).

-The speakers at a session on public relations had a section in their presentation entitled “How to Kick Comic Sans to the Curb.” Awesome. While I think the hate on Comic Sans has gone a little too far, it’s nice to see people spreading the sound advice to not use it as a default “fun” font crutch.

-If you’re going to eat dinner on the Riverwalk, you’ll make things easier on yourself if you attempt to enter restaurants at the river level rather than the street level. If you enter from the street, like my colleague and I did, you may find yourself confusedly trying to navigate what appear to be secret elevators and passageways as you desperately search for any sign of a staff member.

-MakerSpaces are gaining steam as more and more librarians are recognizing the importance of becoming facilitators of creativity and production. We already have our own MakerSpace at BPL, but we’re always looking for ways to improve it, so all the TLA sessions devoted to the topic were appreciated.

-One of the speakers expressed major disgust for attaching signage or display materials to the wall using tape. I chuckled to myself and thought of my boss man, who is engaged in a seemingly unending crusade against taped signs at our library.

-In a session about e-books, when addressing a question about patron expectations, one of the panelists explained, in a semi-defeated tone, that her library’s patrons expect Amazon. I can relate, as it seems more and more folks around here are coming to share that expectation. It can be a bit frustrating, and it’s tempting to curse Amazon for being so great and spoiling people, but libraries would be wise to strive to model themselves after the retail monster in some respects, particularly by making our catalogs more intuitive and easily explorable and by making e-book checkout and downloading a much smoother process (though that one’s not yet entirely within our control).

-It always makes me jealous when I can tell the people in the session next door to mine are having a way better time. While attending the aforementioned e-book session, which was interesting yet relatively subdued, every ten minutes or so, I was made envious by the sounds of thunderous applause, hearty laughter, and a jubilant whooping man who sounded like a combination of Ric Flair and Yosemite Sam coming from the next room.

-I know I mentioned this last year, but I can’t stress enough how lucky I feel to be able to waltz right into the veritable ghost town that is the men’s restroom at the conference while my female counterparts wait in a line that extends out the door and around the corner. It must be similar to the feeling Wonder Woman gets at the Hall of Justice restrooms. 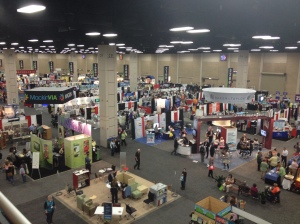 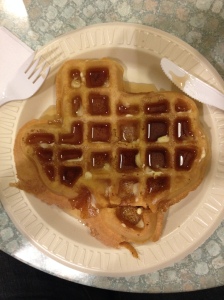 We feasted on La Quinta’s scrumptious Texas-shaped waffles each morning.