Season five of The Walking Dead has dropped on DVD, and that means Undead Heads are shuffling and shambling their way to the library to check it out and experience the latest ways the show can underwhelm them*. It’s a hot commodity, so those who want it have to join the hungry hordes in the holds queue. I was helping someone yesterday who was excited to have reached the top of said queue and receive her coveted item, but much like a zombie who discovers a brainless victim, she was bummed out after realizing only volume two had arrived. Because everyone is trying to watch the season from the beginning, the hold list for volume one is significantly longer than that of volumes two and three, so her request for volume two was predictably filled before her request for one, which is obviously a quick way to kill a binge watching session before it starts. She turned the item in and came to me wanting to re-place it on hold, but didn’t want it to beat volume one here again. I suggested waiting a couple of weeks before placing the request again in order to allow time for her to make it to the top of the volume one queue. By doing so, she’d be gambling that the queue for volume two wouldn’t get too long in the meantime. It was an imperfect solution, and I got the feeling that I was overlooking a better way to handle the problem.

A quick consultation of the catalog’s features confirmed that my solution and I indeed were/are (my personal imperfection is ongoing) imperfect, but fortunately, there was an easy remedy. When placing a request for an item, there’s an option I had heretofore ignored entitled “Activation Date.” Here’s where you’ll see it in the catalog: 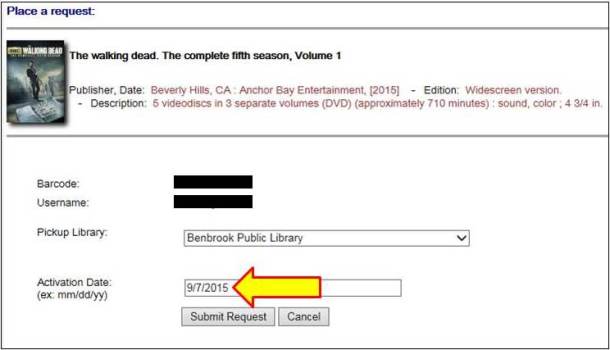 It allows you set a future date for your request to activate, which will still put you in the holds queue for an item immediately, but your request is classified as “inactive.” With an inactive request, you’ll still remain in front of those who place requests after you and advance in the queue, but if you reach the top of the queue, the item won’t be shipped to you until your request activates. This is a game changer for those trying to get their hands on newly released TV series in order or those who may go away from home for extended periods of time and don’t want to miss out on checking out their long-awaited holds while they’re gone. I think the ideal strategy for TV series watchers is to place holds on each volume of a season all at once, but set the activation date for all volumes after volume one to two months or so in the future. Then, once you actually receive volume one, log in to your library account and change the activation date to the current date. That way, if you’ve reached the top of the queue, the next available items will be shipped to you, and if you’re not yet at the top, at least you’ll be much closer to it than you would’ve been had you waited to place the hold until you received volume one.

You can change the activation date of your requests at any time by logging in to your library account, clicking “Requests” on the left side of the page, selecting the request(s) for which you’d like to alter the activation date, and clicking “Suspend/Reactivate Selected.” Here’s a visual aid:

Pretty nifty, eh? Use it wisely, my friends. As for the aforementioned Walking Dead fan, I placed inactive holds on volumes two and three for her. Here’s hoping this slick library catalog feature helps her and all of you binge watch in uninterrupted bliss.

*For what it’s worth, I’m usually fairly critical of the show, but I actually thought season 5 was the best it has been in a few years.