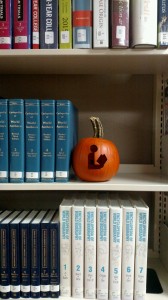 Fall: It’s a time for colorful foliage, hoodies (if you live anywhere other than Texas), baseball playoff choke jobs (if you live in Texas), and all things pumpkin. While many go gaga for pumpkin spice lattes, I say forget the spice; just give me the pumpkin. Not to eat, though. That’s kinda gross. I prefer them strictly for decorative purposes, and for makeshift head replacements for cranially challenged horsemen.

Specifically, I like jack-o-lanterns, but rarely make them due to my aversion to getting messy and pedestrian knife skills. Thankfully, I work in a place that has both a sophisticated, high-powered machine capable of cutting with great precision and a director who grants his staff the leeway to put a piece of fruit with gooey explosion potential inside said machine. Yes, we carved a pumpkin with our laser engraver, and the result was pretty awesome.

The process was fairly simple. The first step, unfortunately, was still to decapitate the pumpkin and de-seed it. While digging around in there, we scraped the inner wall of the side we planned to cut pretty thin, which was recommended by some intrepid laser carvers we read about online. Next, with the unpleasant mushiness over, we imported our desired image into CorelDRAW and used the “Outline Trace” feature to get a nice, cuttable design. Loading the pumpkin into the engraver gave us a brief scare, as it initially appeared too large to allow for proper distance between it and the laser, but removing the grid tray solved that problem (fortunately, we were using a small pumpkin; a full-size one would not have fit). We cranked the power up to 100, set the speed to a super slowmo 5, and let it rip. Behold:

Here’s a closeup shot of the finished product: 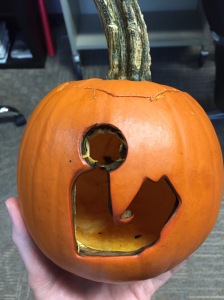 I had to use a knife to finish off the head because I didn’t make the top area of the inner wall thin enough, but other than that small section, two passes of the laser was enough to cut clean through the pumpkin. With the laser taking our jack-o-lantern game to a new level, knife-only carving now seems primitive.

If you’d like to get in on some high-tech pumpkin artistry, bring in a pre-gutted, small pumpkin and a design you’d like to try. Your design should be in a vector file format, or a JPEG or PNG containing simple artwork (photographs may be too tricky).

Next up*: Laser carving your Thanksgiving turkey.

One thought on “Pumpkin Carving for the Modern Halloweenophile”

Error: Twitter did not respond. Please wait a few minutes and refresh this page.