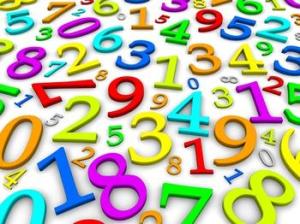 Because I’m writing this, you can safely conclude that I failed to win the historically humongous Powerball jackpot this past Wednesday. If you’re reading this, you’re almost certainly not one of the three winners, as those people are busy shopping online for Faberge eggs, hiring the cast of Friends to do a live reunion* in their living room, constructing impenetrable underground bunkers to hide out from the mooching friends and relatives who have descended upon them, or whatever weird stuff multi-millionaires do for kicks. Clearly, those of us in this space all stink at picking lottery numbers and need to step up our game. While the odds of actually winning the lottery are not much better than getting 1,000 monkeys with 1,000 typewriters to reproduce the exact text of Shirley Jackson’s short story The Lottery, if you must play (though why would you now that the jackpot is down to a piddling $40 million?) and are sick of using your pets’ birthdays as numbers, I have some literary-inspired numbers for you that just may eventually prove to be lucky:**

1 – In the Lord of the Rings series, the One Ring rules them all.
7 – There were seven horcruxes in the Harry Potter series, the destruction of which enabled the defeat of Voldemort.
9 – In A Clockwork Orange, Beethoven’s Ninth Symphony is the soundtrack to Alex’s joy…and eventual terrible pain, but let’s ignore that part.
12 – Katniss Everdeen of The Hunger Games hails from District 12, and the odds are ever in her favor.
19 – One of my favorite children’s books, Sideways Stories from Wayside School, is about an elementary school that was accidentally built with one classroom per story of the building. The school doesn’t have a 19th story. As a forgotten number, pouncing on it is to our advantage.
42 – According to The Hitchhiker’s Guide to the Galaxy, 42 is “the answer to the ultimate question of life, the universe, and everything.” Surely it’s also the answer to “What’s the best lottery number?”

So, if you believe in the transformative, life-changing power of books and aren’t fazed by ludicrously long odds, put these numbers to the test. Just don’t be mad when we all win, have to split the jackpot, and come away with about $50 each after taxes.***

*Surprisingly, earlier this week, an actual Friends reunion was confirmed.
**By “just may eventually prove to be lucky,” I mean they’re just as good of a blind dart throw as any random combination of numbers you could slap together.
***I’m grossly overestimating my readership, but it’s a post about winning the lottery; as long as we’re indulging fantasies, let a man dream.