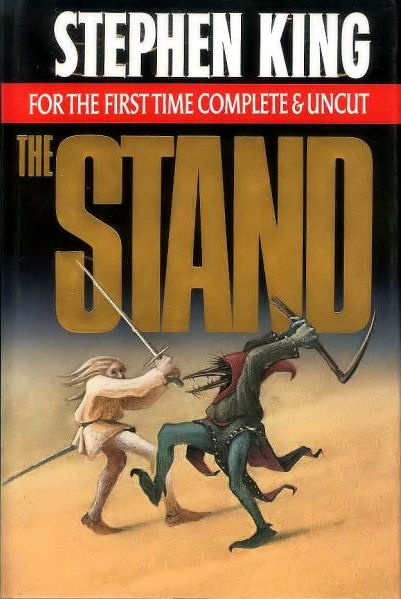 A few weeks ago, I sucked it up and decided to finally tackle a longstanding item on my to-read list: The Stand by Stephen King. Why do I make reading a highly-revered book for pleasure sound like something to be approached with the feet-dragging reluctance usually reserved for cleaning the dryer lint trap? As fantastic as The Stand is proclaimed to be and how fantastic I’ve found it to actually be so far, it is loooooong. Like Heard it Through the Grapevine long, though not nearly as repetitive. With its 1,300 + pages, reading it requires a major time commitment, and for a book monogamist like me, such a commitment means agreeing not to get involved with any other books for four to six weeks. After putting in three weeks and getting through nearly 800 pages, I regrettably had to put The Stand on hold to read the library’s April book club selection, Cooking for Picasso, meaning I’m currently violating the code of the one book man.

Do I enjoy cheating on The Stand? Laws, no! While I’m enjoying Cooking for Picasso, if I could, I’d be curled up on the couch with The Stand right now. It’s not all my fault. What is it trying to pull being over 1,300 pages? That’s like four books in one. I’ve got other obligations. I was driven into the pages of another book, I tells ya!

Rationally, I know it’s not the book’s fault; I need to take a look at myself. Maybe I’m a slow reader. I looked to Pew Research Center, which conducts an annual survey to determine the reading habits of U.S. adults ages 18 and over. According to their results, the average adult in 2016 read 12 books a year, a number that has held steady for the past several years. My Goodreads reading history tells me that I read 49 books in 2016, so I was significantly above the average. Now, this isn’t a totally fair comparison, because without knowing the actual time spent reading by me and the average American, we can’t really know how my reading speed measures up; sure, my completed book total quadrupled the average, but I had a book “going” pretty much every day of the year, even if I didn’t actually read every day, whereas the average American almost certainly wasn’t always mid-book.

Perhaps it’s more fair to compare myself to Goodreads users, who are ostensibly more voracious than average readers. Looking at the results of the 2016 Goodreads Reading Challenge, I calculated that Challenge participants read an average of 12.94 books in 2016, which is barely more than Pew’s average reader. The average number of books read by Challenge participants fell from 16.99 in 2015, which fell from 28.35 in 2014, so it seems Goodreads users used to be heavier readers. Still, by those metrics, I come off as some sort of super reader.

But that doesn’t seem right. I know there are BPL patrons who blow me out of the water in books read per year. I know, it’s not a contest; we should simply celebrate reading of any non-zero amount, and know that all readers are different. Some may breeze through a gargantuan book like The Stand in a day, while others may take a month or more. It’s all good. Tortoises, hares, bingers, part-time readers, book monogamists, book polygamists: you’re all doing it right.

2 thoughts on “Are You a Reading Tortoise or Hare?”

Leave a Reply to A Covington Cancel reply