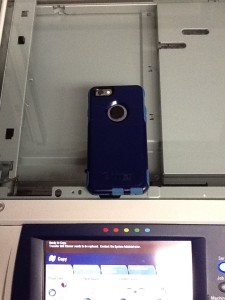 You mean there’s a better way?

Last week, a library patron showed me something new in attempted technological ingenuity when she tried to make a photocopy of her phone screen. Before you make fun, consider 1) putting something you’d like a copy of into a machine that makes copies isn’t the craziest thing and 2) there are way dumber things to put on a copier, namely body parts that shall remain nameless. She was trying to problem solve, and while it didn’t work out (photocopying an LCD screen produces a solid black rectangle), I respect the effort.

The image this patron needed a paper copy of had been sent to her as an e-mail attachment, which made freeing it from its phonular prison as simple as pulling up the e-mail on a desktop computer and printing it out. Had the image not been readily available as an attachment, getting it from screen to paper still could have been easily achieved with the added step of taking a screenshot, which I personally find to be one of the most useful functions on a smartphone. To quickly capture whatever appears on your screen at the moment and save it as an image file, press the home and lock buttons simultaneously (on an iPhone) or the home and power or volume down and power buttons simultaneously (on an Android).* I screenshot all the time, usually to save an image to my phone without giving certain apps permission to access my camera and photos (back off, Facebook and Twitter). It’s of course also great for capturing text or images you’d like to print when you don’t have them available as a traditional document. Simply take the screenshot, save it, and e-mail it to yourself.

OR, if you’d like to cut out the added step of e-mailing yourself and hopping on a printer-connected computer, you can try out the convenient wizardry that is wireless printing, which we offer at ye olde your futuretronic BPL. By using the free PrinterOn app, sending your document to a dedicated printing e-mail address, or uploading your document to PrinterOn’s web portal, you can send print jobs directly from a phone, tablet, or laptop while at home or in the library (or anywhere else, really) to the library’s print queue. Then just waltz in, pay, and pick them up. Bam. Easily go from screen to paper, with no need to involve desktop computers (or photocopiers).

For additional details on wireless printing at the library, click here.

*This very well may be old news to you, but as the case described in the opening paragraph illustrates, it isn’t quite universal knowledge.