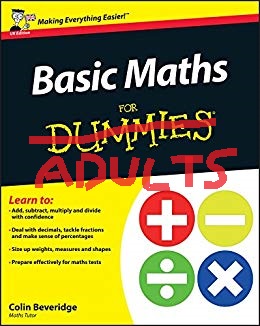 Earlier this week, I was approached by who I’m assuming was a middle school-aged child and asked to help him with a math problem he was having trouble with. Simultaneously flattered and terrified, I trepidatiously followed him to our Teen Room and hoped for something improbably simple, like good ol’ solving for X, but expected something impossibly complicated (at least for me), like calculus or some similar mystifying madness. Thankfully, the problem in question fell on the lower end of my personal difficulty/fear index: calculating the volume of cylinders and cones. I don’t carry the formulas for such calculations around in my head, but the young lad’s homework mercifully included the needed formulas. After talking it through, we figured out how to discern the necessary information and worked through the steps to solve the problem. Victory achieved.

I feel like I got pretty lucky in this situation. I was fully prepared to have to tell the boy I was useless and that he would have to consult his teacher, a more math-y adult, or the library’s online tutoring resource. He, just as many of us surely did at his age, saw an adult and assumed that any assignment given to him in school could be handled by that or any adult, as they’ve completed school and thus presumably mastered the contents of the K-12 curriculum long ago. Clearly, he’s never seen Are You Smarter Than a 5th Grader? For a lot of people, information and skills learned in school fall into the “use it or lose it” category. Growing up, we liked to groan, “When are we gonna use this stuff?,” particularly with math. Unless you’re an engineer, math teacher, professional mathlete, or hardcore math enthusiast, you probably don’t use calculus on the regular. But what about other types of math? Surely the only worthwhile reason for knowing it isn’t so we can (maybe, if we remember it well enough) teach it to kids?

I thought about the various uses I have for math at work, and here’s what I came up with:

–Budgets – When I spend money on books and other items for the library’s collections, I have to be able to do basic subtraction and addition so that I know how much money I have left. Actually, an Excel formula does this for me, but I told Excel to do it, so I take at least partial responsibility and credit.

–Collection Reports – Every month, I run reports on each of the library’s adult collections to see how they’re doing. I manually add the columns “Average Circulations Per Year” and “Months Since Last Checkout” to the reports. Again, Excel does the actual number crunching part, but in order to create the necessary formulas initially, I had to use subtraction, division, and proper order of operations.

–MakerSpace Costs – When library patrons create stuff using our MakerSpace, particularly when they use our stock of materials on the engraver, we have to calculate how much they’ve used and how much they owe us. This involves a simple calculation of area to determine the amount of material used, followed by multiplication by a set price to determine amount owed.

–Book Shifting – Every now and then, I have to do a large-scale shift (which is a fancy way of saying “moving books from one place to a slightly different, very nearby place) of a collection of books. In order to do this optimally, I have to measure how many inches worth of books I’m dealing with, measure the total amount of shelf space I have, subtract the former from the latter, then divide by the number of total shelves to determine how much space to leave on each shelf.

–Cakeulus – If a staff member has a birthday and we gather at 3 PM to celebrate, and three sevenths of the cake remains uneaten, and the library closes at 8 PM, and I come in at 9 AM the following morning, how long can I safely wait to eat a second piece before it’s all gone? The answer is almost always “Not as long as I think.”

That’s about it. I’m sure there are other mathematical concepts and abilities floating around in my brain, and I’m hoping that if a kid asks, I’ll be able to conjure them and that they haven’t been permanently displaced by all the other knowledge I acquired during childhood that’s definitely still in there, like the cast of Saved by the Bell and the locations of the warp points in Super Mario Bros. You know, useful stuff.